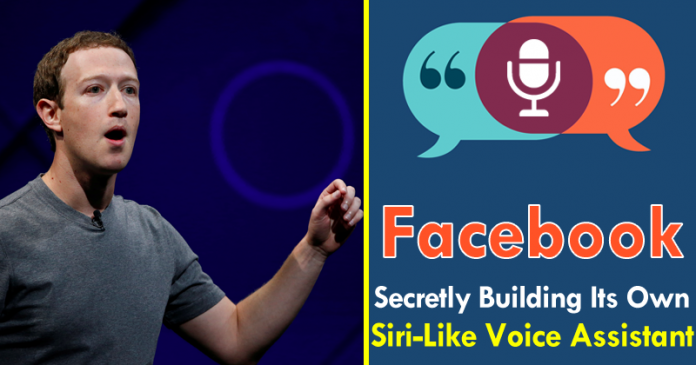 Facebook is developing its own voice assistant, which would be launched as a test in 2018. With this, Mark Zuckerberg’s social network will try to enter the market segment that is currently led by the tech giant Apple’s Siri, Alexa from Amazon and Google Assistant.

The social network giant Facebook is developing its own voice assistant, which would be launched as a test in 2018. With this, Mark Zuckerberg’s social network will try to enter the market segment that is currently led by the tech giant Apple’s Siri, Alexa from Amazon and Google Assistant.

It is difficult to think that the social network giant Facebook wants to stay out of some really important sector of the technology market. We know of its intentions to diversify its proposal, beyond a social network, becoming also the largest and important news platform in the world.

In addition, it is strongly determined to enter the streaming television content segment, investing more than $ 1 billion in original content creation for its new Watch platform, recently launched in the United States.

That, without neglecting its social side, improving the way you can connect better with your friends, before appointments or exit plans. But it also wants to have its own voice assistants like Siri or Alexa and would be developing its proposal.

Blake Tsuzaki (web developer) recently discovered a voice search code not published by the social network of Mark Zuckerberg, of course, Facebook in the last update of the mobile application.

Even several details of this leak were shown by the publisher of The Next Web site, Matt Navarra, in his Twitter profile, where you can see clearly in the code, references to a possible voice assistant, able to listen to the user, make suggestions and look for basic information.

Anyway, all the sources that echoed the information, have emphasized that the assistant would be in an early stage of development, although it is also foreseen its possible implementation only next year.

One important detail to consider is that, as detailed in the Business Insider portal, this Facebook project has been devised within Building 8 (Building 8) of the company, the place where the most innovative proposals of the firm are born.

Apparently, this assistant would be a fundamental part of a larger project of the company: its own smart speaker, codenamed “Aloha”, whose initial launch would be – apparently – in May 2018.

If this is true, the Amazon Echo, Google Home, Andy Rubin’s Essential Home and the recently introduced Apple HomePod (among others) will have another company. This market has had several developments in recent months, such as Samsung’s decision to postpone its efforts to develop its own loudspeaker and, in addition, the expansion of Bixby (virtual assistant) to many more countries.

Finally, the news that Amazon and Microsoft have made an agreement, whereby their voice assistants will be able to integrate with each other so that Alexa and Cortana will be fully compatible, as well as the speakers that contain them.

So, what do you think about this? Simply share your views and thoughts in the comment section below.